Born in 1958, I spent my childhood and youth in Oelnitz / Vogtland. From 1968 to 1974 I learned to play the clarinet and saxophone at the local music school. In 1974 I went to Berlin to study saxophone and flute at the Hanns Eisler University of Music. From 1978 I played with many bands, orchestras and projects, until I founded my first own band, the “Volker Schlott Quartet” in 1985 and started the solo project “Reeds Solo”. In 1982 I started to compose for my own bands and projects. To date, many bands, projects, workshops and compositions have been added (see ‘career’). 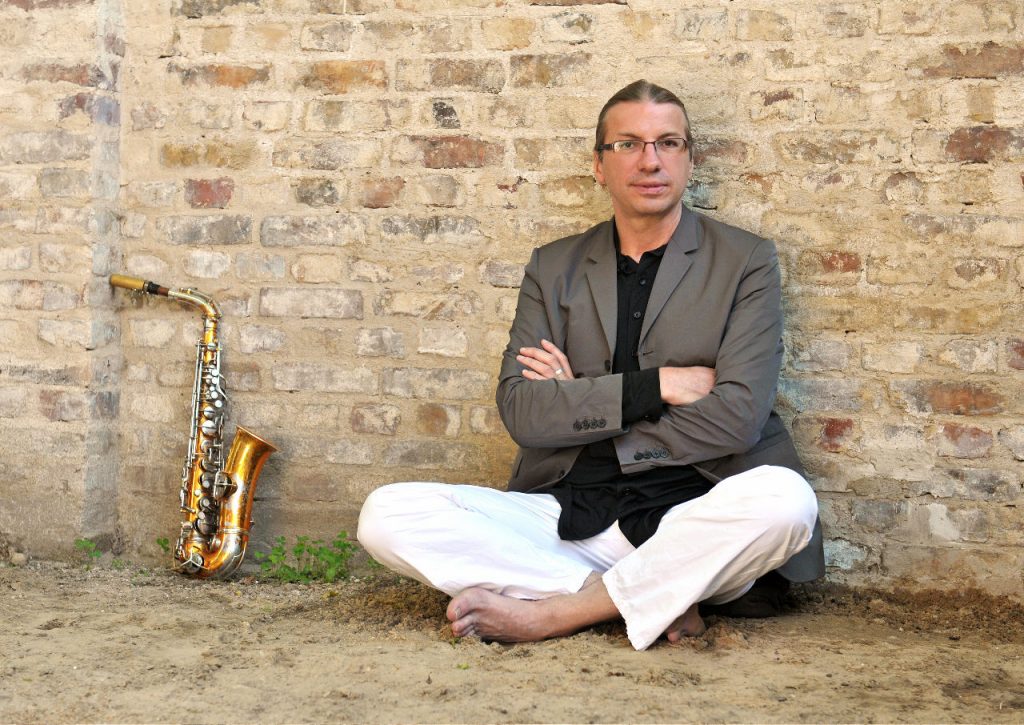 I tried to “translate” my innermost feelings of the past years into musical moods and reproduce them on this CD. Even if there are and must be controversial perceptions and reactions, it was very important to me to stay with myself. It is about “my story”, which, with the exception of two or three very close friends, nobody knew.

The compositions initially had a rather experimental character. In the course of the work, however, the melodic pieces gained the upper hand. It was about juxtaposing melancholic and happy sounds and creating a feeling of well-being.

For me, the result is a kind of “journeyman’s piece”: as a producer, composer, arranger, studio musician, sound engineer and at the same time protagonist. Because yes: it is a studio production in which I played or programmed all the instruments myself. In this way, the music follows a special sound aesthetic that some may find unexpectedly “clean”. I hope for their impartiality and for the depth of the feelings of my story to be received.

After finishing the recordings in August 2017, I should have heard and checked the songs at least several hundred times. There were days when I no longer felt anything in the music that was there initially.
At moments like that, I felt like I was in a long tunnel, at the end of which there was no light. But I absolutely wanted to and had to go through this process of searching, rejecting and finding, because it also very authentically reflects my emotional and musical state of recent years. Therefore I was happy to be able to hand over the music for the very last step, the mastering, to my mentor and very first band leader Wolfgang Fiedler. Now it is time to implement this music live – with a fantastic band, which I will present from 2018.

There is still a lot of educational work to do – I would like to take part in this. With this CD and with my band. With concerts, after which I get to talk to other people … and enjoy the freedom to convey my inner being to the outside. Some will ask, isn’t it all a bit late? At 60? No, not at all. I saved this job for the next 10-15 years, because I already know everything else …

I would like to thank my family, Jocelyn, Fini and Jonathan + MAFIN. My siblings Günter, Peter, Birgit and Petra. My father Rudi and my mother Ursula (who unfortunately can no longer experience this live). With all my friends and supporters who have accompanied me on this path and hopefully will continue to accompany me from now on. And also for those who don’t understand it yet.

You can find out more about which cookies we are using or switch them off in settings.

This website uses cookies so that we can provide you with the best user experience possible. Cookie information is stored in your browser and performs functions such as recognising you when you return to our website and helping our team to understand which sections of the website you find most interesting and useful.

Strictly Necessary Cookie should be enabled at all times so that we can save your preferences for cookie settings.

If you disable this cookie, we will not be able to save your preferences. This means that every time you visit this website you will need to enable or disable cookies again.